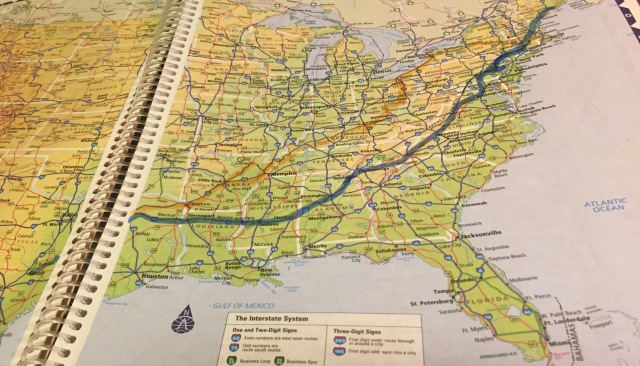 In five weeks, I start my annual journey from Austin to mid-coast Maine.

The route I took last year is marked on my old Road Atlas in orange. I went through the Jim Crow rice fields of Arkansas and straight across Kentucky, cruising on its generous and restful parkways and veering north to cross the Ohio River on an old trestle bridge. On the drive out, I had my daughter, Jane, with me, and we shot straight up Ohio into New York so that she could see Niagara Falls. On the way back I cut across West Virginia on Route 50, taking on Appalachia one stubborn ridge at a time and plunging straight into the humid South, like Dante entering the gates of hell.

This year, I am going to avoid the sad flat part of Arkansas and cut across Louisiana, Mississippi, and Alabama, states that I have never seen. On some future trip, I will drive the back roads through bayou country, but this year I plan to take on the full length of the Blue Ridge Parkway from Georgia to Virginia, so I’ll make quick work of the redder states. I know the route from Virginia to Boston well; I lived in Charlottesville for six years. If I weren’t stopping off to see my parents, I might continue north on the Taconic and drive from the Adirondacks across the Green and White Mountains into central Maine.

I do love road trips. I like waking up before dawn and hitting the road as the sky begins to pale, smelling that early morning freshness as I tank up for the first time of the outskirts of some one horse town. I love one horse towns and even towns that are just a strip along the interstate. I like that sweet glimpse of life seen in the moment you drive past a backyard in some little town — a girl chasing her dog, a family seated outdoors at a table decorated with balloons and a paper cloth.

As many people have observed, the United States is full of small towns. They all have downtowns, hearkening back to the day when downtown was the center of life and commerce. Now that life has shifted elsewhere. I remember sitting on the high curb of my childhood downtown, Saxonville, watching an Independence Day parade.  Soon afterward, the carpet factory that was poisoning the water closed down, and Saxonville ceased to exist, just like that; letters mailed to us no longer mentioned it in their address, and even the elementary school changed its name to honor one of the former principals instead.

Our village became part of 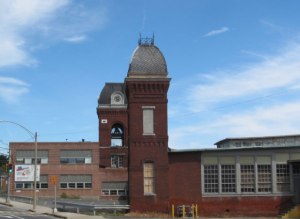 Framingham, and the downtown shopfronts went to wrack and ruin. Of course, some a civic-minded former mill worker devoted her life to sparing the carpet factory from being torn to the ground; there is always someone like that, at least in New England. Her efforts paid off; the nineteenth-century buildings of that downtown, along with the Dickensian spires of the factory itself, were placed on the Historic Register in 1992. But as a community, Saxonville was gone forever.

Downtowns across America have met the same fate, and this is something you cannot help but notice when you drive across the country. The poorer the state, the more it seems apparent: in wealthy states, like Massachusetts, historical societies step in to protect us from our inclination to kill the past.

But in Arkansas, the downtowns I saw were tragic. Boarded over shops and restaurants lined the streets. Big agriculture rules this part of the world, and the seed shops gleamed with newness in stark contrast to defunct general stores and cafes that were literally deteriorating. I took a side trip to Hope, the birthplace of Bill Clinton, on the way home. I could not find his childhood home. The signs were vague; I lost the trail somewhere in the back streets of yet one more falling apart downtown. 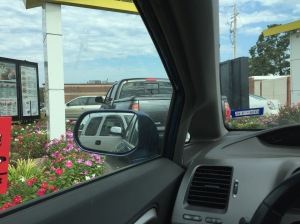 The only place that was really jumping in Hope was the McDonalds on the outskirts of town, near the freeway interchange. It had a brisk two columned line at the drive through when I pulled in a few minutes later to purchase something my dog might eat. I pulled into a spare lot at eight in the morning; the sun was already mean and glaring. The dog sniffed at the burger and looked away. I should have ordered scrambled eggs for him. I took a bite out of my own Egg McMuffin and tried to imagine life here, with the twentieth century dismantled and the twenty-first century not yet in place.

I had spent the night before in a motel where homeless people lived. When you travel with a dog through middle America, you will stay in a lot of motels like this. I don’t mind. Families congregated around the pool, talking. Watching their children jump in the water gave me food for thought. The children’s enjoyment was restrained, almost polite. I wondered if they would remember this place, because of the pool.

A young Asian family had purchased the franchise several years before, and they were barely making a go of it themselves. The place was under construction in the haphazard way of people without a dime to spare. They had hired people to clean the rooms in exchange for a place to stay, which is a good idea, except it meant the rooms weren’t passably clean and were being cleaned at all hours of the day and night. Children’s bikes lined the corridor behind the office; they were living in the place themselves. I had the woman behind the desk move me from the first room she showed me because the mini fridge was still full of food, and the former occupants had been heavy smokers. She did it in an expressionless way, without surprise.

I wanted to say to her, I understand. I have my own money pit. But to her I was just another Potential Bad Review who had been lured in by the brand name recognition and would not be coming back.