It’s been a while since I’ve posted here. Not only is this the grueling part of my teaching semester, but I also feel more generally burnt out. Since the divorce a few years ago, I’ve been tackling one big project at a time without a significant pause to focus on myself or slow things down. My mind and body have decided, I suppose, to stage a coup. I am sleeping more and ramped up my self-care efforts; after a long phase of very little activity other than walking my dog, I’ve begun strength training and regular aerobic exercise again. Fortunately, in a couple of weeks, the semester will be over, and I’ll have time to get in a rhythm of weekly blog posts and think about how to present information in the year ahead.

Meanwhile, I decided to hire the Davis Agency, which lists properties on the Blue Hill Peninsula as well as nearby Mount Desert Island, to manage the Anchorage and Cabin for me as seasonal vacation rentals next summer. I sent their representative some photos so that she could give me an estimate of how much I might charge per week for the place. Once she and I talk on the phone again, I’ll start posting this information to the blog and on my Facebook page.

It occurred to me, as I compiled the photos, that I have never really given my readers here a run through of the place.

Although I’m not thrilled with the quality of these photographs — many were taken on a cloudy day, and a few are not well focused — at least they give an idea of what the houses look like on the inside.

Let’s start with the barn. Note the row of small square windows near the

corner roof. There are two lofts inside; the one with the windows was used as a home gym. An ancient bench press that must weigh several hundred pounds is parked in there. There is even a shower, though it doesn’t work at present. The ground floor is big enough for someone to work on a small boat or have an artist’s studio; there are nice workbenches in place.

As everyone has remarked, the barn is “spooky.” I thought so myself. It’s dark in there! If you open both large, sliding doors it’s quite nice, though. I especially like the view of the house from there. But I need to have an electrician out to see about reinstalling the electricity.

The main house, the Anchorage, was built in 1812 by a member of the John Billings family, who received a large land grant in the area. Details about the first years of the house vary. It is described as the “Billings Homestead” in the Sedgwick Bicentennial brochures; copies of the original deed hang in one of the downstairs bedrooms. I will write more on the history of the house at another time, though. I need to speak with the Sargentville librarian and the family who owned the place before me so that I can piece together the facts and place the construction and occupancy of the house in a proper historical context. It’s clear that at least two additions to the original house have been made — at the north end of the house, someone grafted an outhouse and a pig shed on to the back — and that one bedroom, possibly a parlor or winter kitchen, was converted into a downstairs bath.

The house has three wings radiating out from the dining room, which is the center of the house. Each of these wings can be a separate apartment; they have their own baths, doors that close them off from the rest of the house, and separate entrances.

The fireplace in the Anchorage living room

China cupboard and doorway to the east wing of the Anchorage 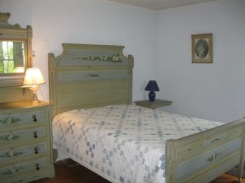 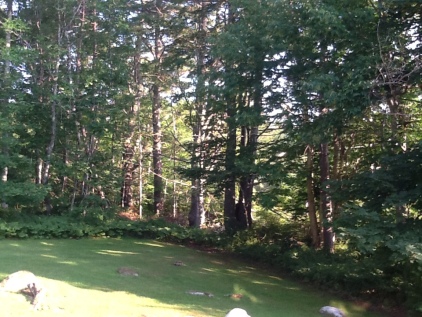 The east lawn of the Anchorage 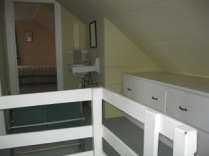 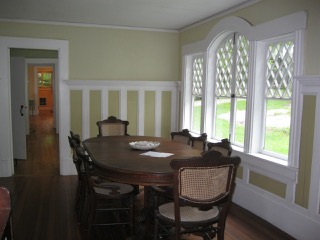 Anchorage, dining room table and view of west wing hallway all the way to the 3/4 bath at the end 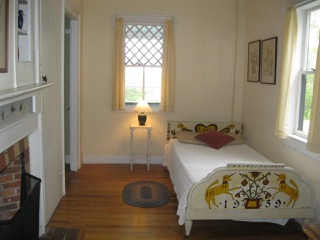 “Little Otie’s” bedroom on ground floor of the Anchorage

“The throne” — north wing bathroom in the Anchorage 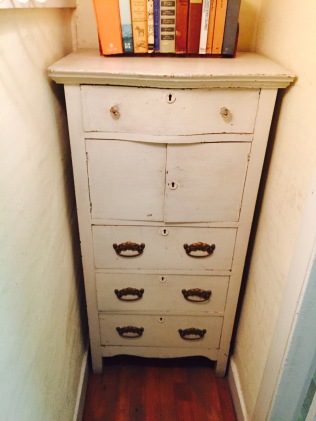 Bureau in the walk through closet of the west wing suite 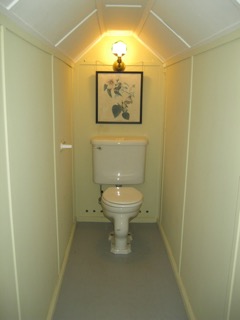 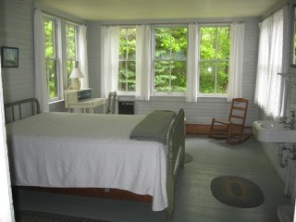 Anchorage, ground floor back bedroom with bay windows and heater 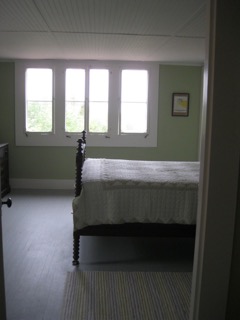 Outside view of the shower window on the Anchorage

The house is full of nooks and rambling passage, like the walk through closet that links the single bedroom on the west wing to the Map Room. The steep stairs to the second floor are behind a doorway off the dining room that, at first glance, seems to be a closet. In the north wing, a long corridor ends with an the laundry room, then veers off to the left, where there is a winter entrance leading to a rambling three-quarter bath.

The toilets in the house are wonderful. Apparently bathrooms were installed only recently because the summer family that owned the place did not want to destroy the authenticity of the experience with modern conveniences. Perhaps that is why they created such unique, fun, and comfortable baths when they finally got around to it.

“The throne,” a toilet perched high at the north end of the house, beyond the utility room, is perhaps my favorite place in the house. Open panels on either side of the stairs that lead to this toilet let in fresh air and summer breeze; you can sit uninterrupted, reading in the natural light. The bathrooms also have working heaters, which is a nice touch. 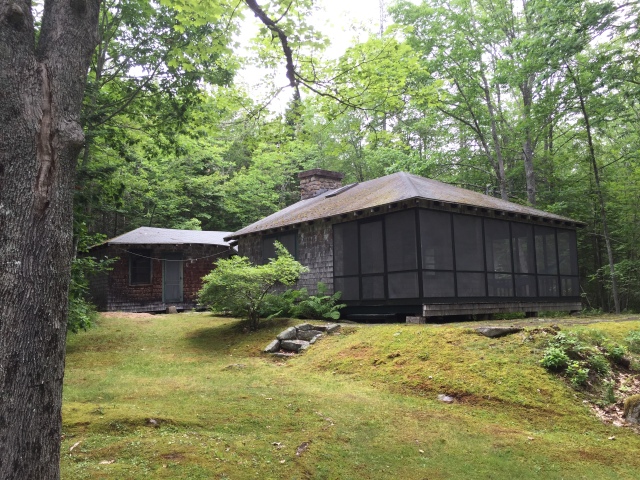 Cabin, looking through full jack and jill bath to the front bedroom 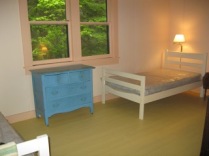 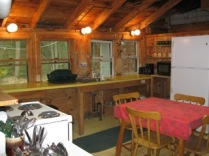 I’m especially disappointed in the photos of the Cabin. They completely fail to capture the charm of the place — its high ceilings, the finished bedrooms contrasting with the unfinished kitchen, the comfort of the porch. It looks ramshackle in the pictures, and it isn’t, not at all. It was built of solid materials and is durable and well-thought out in terms of its design. The Adirondack rusticity forms a nice counterpoint to the Continental touches of the Anchorage. It is so pleasant that several people who were interested in buying the property expressed a desire to keep the Cabin and tear down the main building. Unthinkable — but a good indication of how the Cabin makes you feel when you step inside and walk around.

I will be finishing this house off over the next several years, starting with a proper foundation next June. The back wing of the house is sinking badly and needs immediate attention. I thought about tearing off that wing –and the contractors didn’t disagree — but I like the idea of dividing off a section of the big bedroom at the back of the house to make a utility room. Skylights in that bedroom will bring in light, and once the brush is down, and some landscaping is in place out back, it will make a wonderful room for guests.